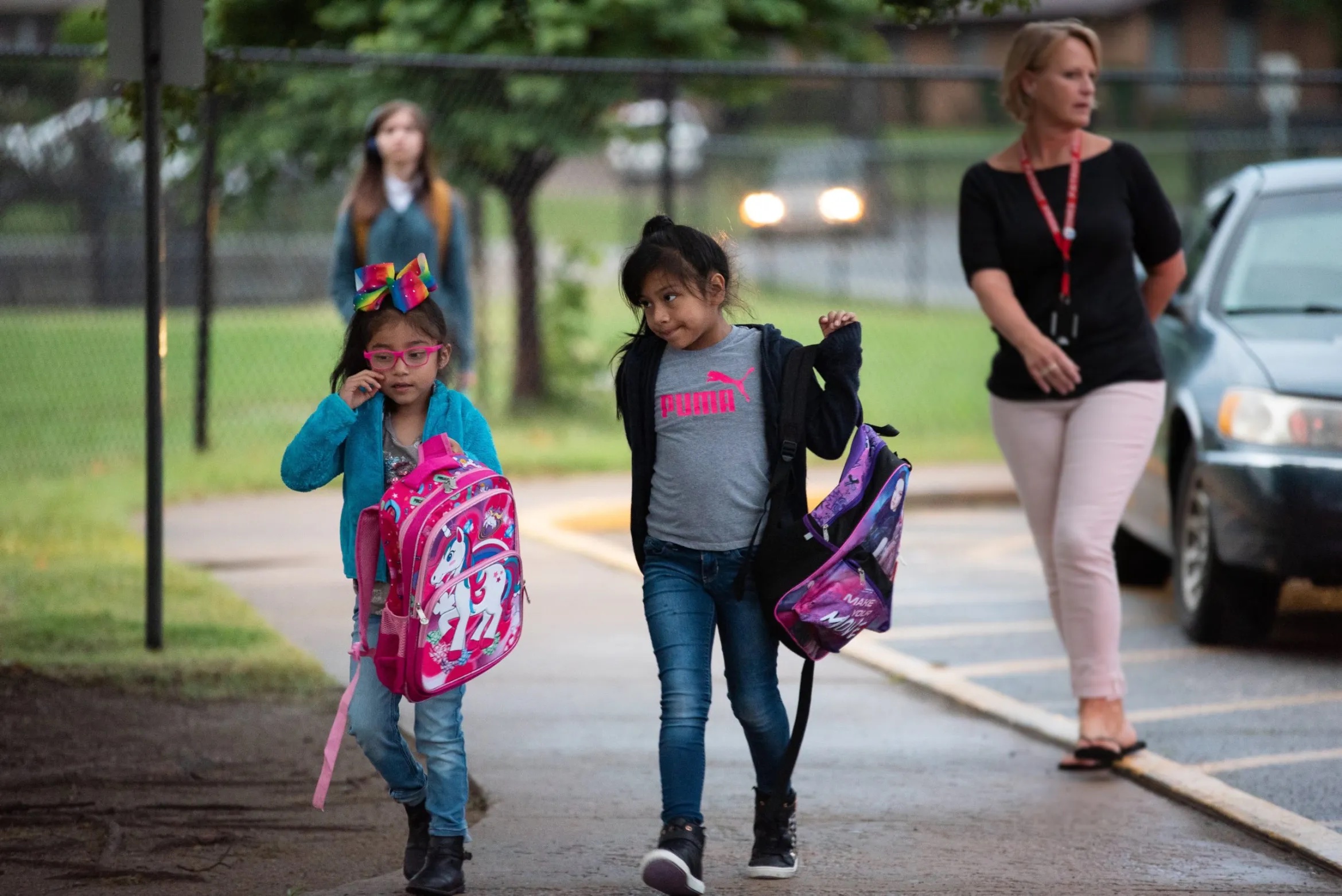 A complaint by a white teacher at Memorial High School about an outsourced training course – that factually noted the role whites have played in America’s racial history – has prompted the state of Oklahoma and Gov. Kevin Stitt with threats to sanction Tulsa Public Schools and downgrade its accreditation.

The Oklahoma Eagle filed an open records request with the Oklahoma Department of Education to see the original complaint filed by the unnamed teacher, who railed against having to take a course that “shame white people for past offenses in history.” The teacher – and Stitt – says the training violates the state’s controversial House Bill 1775, which prohibits public school teachers from teaching that “one race or sex is inherently superior to another.”

“I must complete a mandatory set of 3 compliance courses” the teacher wrote in the complaint. The “compliance course contains a section that includes statements that specifically shame white people for past offenses in history, and state that all are racially biased by nature.”

The teacher’s complaint comes as two Tulsa school board members – Jennettie Marshall and E’Lena Ashley, the boards only two African American members – succeed in getting Stitt to request a special audit of the district’s finances for “potential mishandling of public funds.”

Stitt has also order Tulsa Public Schools to pay for the audit.

“Not one cent of taxpayer money should be used to define or divide Oklahoma students by their race or sex,” Stitt said in a Twitter video posted to social media announcing his call for the audit.

“Let’s teach students, not indoctrinate them.”

In defending the district, Tulsa Public Schools Superintendent Deborah Gist characterizes Stitt’s action as both personal and professional attacks, noting that he “will go down in history as the most corrupt governor in 47 years.”

An investigation by Oklahoma Watch and The Frontier raised questions about how the Stitt administration distributed portions of $18 million in U.S. Department of Education relief dollars that was supposed to help students during the coronavirus pandemic.

Federal auditors are now investigating how the Stitt administration awarded a no-bid state contract to Florida tech company ClassWallet and distributed relief money, but the report has yet to be released.

Gist said the Tulsa Police Department has been asked to investigate the complaint of possible misuse of public funds.

Oklahoma’s public school system and its Republican lawmakers have become ground zero in the national debate over enacting laws that prohibit teaching about America’s racist past. Proponents of HB 1775 complain Oklahoma’s public-school curriculum was teaching critical race theory, which has never been taught in Tulsa Public Schools.

Critics of HB 1775said the law – which is facing a lawsuit in Oklahoma – is draconian, political grandstanding and severely restricts public school teachers and students from learning and talking about race and gender in the classroom.

Besides reviewing the complaint, the Oklahoma Eagle has requested records related to ongoing investigation.

In the teacher’s Feb. 7 complaint, it alleges the training was in violation of HB 1775 provisions codified into Oklahoma law in 2021. HB 1775 takes aim at critical race theory and prohibits teaching certain concepts. The compliance courses were provided through Tampa Bay, Florida-based Vector Solutions, which is a training and risk management solutions company.

The teacher was not identified in the documents. The state Department of Education has not provided the Oklahoma Eagle with any details about the specific language in the training that may or may not have violated guidelines.

On June 23, when Oklahoma State Board of Education attorney Brad Clark told the board that Tulsa’s training ran afoul of HB 1775. But he did not provide specifics examples of the violation outside the general prohibitions of teaching divisive content that make students feel uncomfortable.

Downgrading is not warranted

Board member Marshall and State Rep. Regina Goodwin have join a chorus of public officials raising questions about the handling of the Memorial teacher’s complaint on the training course.

The state Board of Education has threatened to downgrade Tulsa Public Schools to “accredited with deficiencies,” meaning “a school district or site fails to meet one or more of the standards, but the deficiency does not seriously detract from the quality of the school’s educational program.”

Marshall, who represents District 3 in North Tulsa, said that she has seen nothing in the accusation that would warrant the sanctioning of the 32,500-student public school system.

“I have not seen any documentation that shows that any impropriety took place in the training,” Marshall said in an interview with the Oklahoma Eagle.

“As school board members we should be fully informed about cases like this. We have not been informed.”

Goodwin concurred that the information released to her about the complaint does not substantiate just cause for Oklahoma officials to act with downgrading the district’s accreditation. She criticized this latest attempt as an ongoing lack of transparency on the part of some state public officials.

“How can we be getting a downgrade when they don’t even release the documents that show why they should be taking that action,” Goodwin told the Oklahoma Eagle. “We need to see and hear the sections in question. This affects the public school system in Tulsa. The public should be provided with the information needed to ensure that the proper procedures are followed.”

Goodwin also criticized Gist for not launching a more assertive opposition to the potential downgrading.

In her responses to board members and Stitt, Gist sent a letter complaining about the state’s accreditation attempts and posted a lengthy response on her Facebook page in which she detailed her contempt for both Stitt and Oklahoma Secretary of Education Ryan Walters.

In her social media post, Gist said she has “been clear that I welcome this state audit and any audit of the Tulsa Public Schools to be added to the audit that is already conducted each year. I am confident in our district’s management of funds given our long-standing processes, practices, and policies and given the caliber and integrity of our team.”

Gist also accused Marshall and Ashley of “acting in collaboration with Ryan Walters who is running for state superintendent of education. One has demonstrated publicly that she is blatantly bigoted.”

Gist has publicly accused Ashley of being bigoted toward the LGBTQ and immigrant communities. A recent podcast, The Smitherman Report from The Black Wall Street Times, documented a history of bigoted, homophobic and transphobic video tropes made by Ashley.

The State Board of Education has indicated it will react to the Memorial teacher’s complaint by reclassifying Tulsa Public Schools as “accredited with deficiency.” Its next meeting is July 28.

Elementary School Reading Of Dr. Seuss’ ‘The Sneeches’ Ended After Student Points Out It’s a Book About Racism

The State Board of Education could take more severe action than what Clark recommends.

The Memorial teacher stated the compliance courses were provided through Vector Solutions.

The Oklahoma Eagle asked Vector Solutions to provide a copy of its implicit bias training modules – titled “Cultural Competence and Racial Bias” – that the teacher said she participated in for Tulsa Public Schools’ teachers. But Victoria Zambito, the company’s executive vice president for communications & brand, declined to provide any of its content for review.

In the letter the Oklahoma Eagle obtained about the Memorial teacher’s complaint, it acknowledges that the training lacks “explicit statements,” or “explicit content,” or “direct statements,” and that do not violate the state law in the three cited provisions.

Nevertheless, Clark asserted HB 1775 had been violated. He reached that conclusion saying it was “more likely than not” that the training “incorporates” or “incorporated” these prohibited concepts.

This ambiguity helps explain his statements previously made about the case to the State Board of Education at their June 23 meeting, which preceded the letter.

Then he said Tulsa Public Schools’ violation was a “close call” and that the “spirit of the training or design of it” was the basis for his finding that the district violated the law.

In conclusion in his letter, Clark said, “Based on these determinations and a finding of non-compliance with the Statute and the Rule, the OSDE will recommend that the State Board adjust the district’s accreditation status to “Accredited with Deficiency.”

The state Department of Education was able to secure the training module and recapped its content in response to the complainant dated July 7 copying the Tulsa Public Schools’ general counsel, Jana Burk. In the lengthy description of the training module’s content provided in the letter by Clark included these examples:

The finding in the letter said this course curriculum “training included, incorporated or is based on the outlawed concepts in the Statute…”

The three concepts cited by the state Department of Education’s letter and that allegedly violated the Statute were that an individual, by virtue of his or her race, is a) “inherently racist” or b) “bears responsibility for actions committed in the past by members of the same race” or (c) “feel discomfort, guilt, anguish, or any other form of psychological distress on account of his or her race.” “Sex” prohibitions are also included in HB 1775, but it was not cited or are applicable in this complaint.

The lingering questions the Oklahoma Eagle are pursuing include:

These questions will likely be addressed at the State Board of Education’s meeting on July 28.

“It’s Up To Us To Keep The Flame Burning”